Trending
You are at:Home»TRAVEL»Asia»Discover Top Thrilling Destinations in Cambodia

Cambodia is an enigmatic land where covers lots of fairy tales, thrilling stories, and engaging anecdotes. This results in the fact that this country owns several challenging places for the thrill-seekers and adventurers to discover. If you are curious and brave enough to unveil the curtains of the mystery in the thrilling destinations in Cambodia, then go to see them. 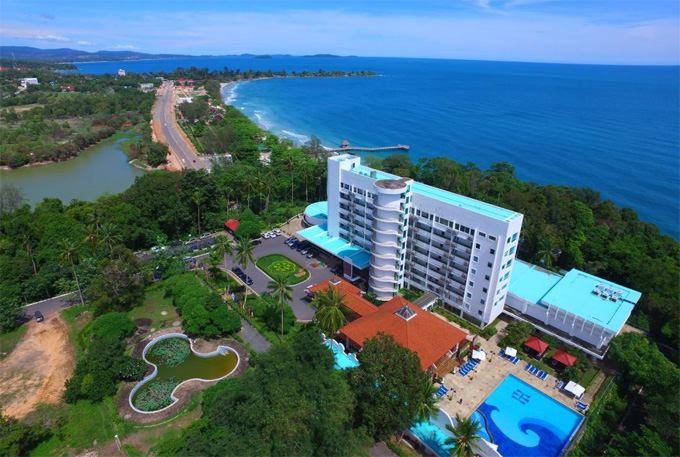 Known with the common name of “The 7-Floor Hotel” or “The Ghost Hotel”, the Independence Hotel in Sihanoukville used to be the symbol of wealth during the years of 1960. However, such symbol was collapsed quickly and became abandoned at the end. This construction was the governmental property which stood out on the Independence Beach and was finished in 1964, under the instruction of M. Mondet, the famous French architect. The furniture design was done by the Prince Norodom Sihanouk.

“The 7-Floor Hotel” reflected the typical Khmer architecture of 1953-1970, with the continuous carpeting throughout the rooms and the imported Bohemia crystal chandeliers. Based on the old pictures taken during the peak time of the hotel, the architecture of this construction was elegant, intricate, and admirable. The main colors used were red, orange, black, green, and yellow which were all combined skillfully to promote the luxury of the amenities, creating the upscale relaxing zones. At that time, the Independence Hotel was the preferred accommodation stop for the prestigious characters in Phnom Penh as well as the special guests from the world such as Jacqueline Kennedy (First Lady of the United States) and Catherine Deneuve (the well-known French celebrity).

Nonetheless, not long after the thriving period, the hotel was closed in the years of 1970 because of the Khmer Rouge occupation. The theorists believed that the rumors about the terrible punishments and the unknown number of the dead in this place made this hotel frightening to the Cambodians. The evil acts of Khmer Rouge drove the locals away from this establishment, leaving it empty and hair-raising.

Then, in 1982, the hotel was re-opened but then be occupied by UNTAC in the years of 1990. Until 1999, the Independence Hotel was left deserted again. With the mysterious and unexplained history, this hotel has been attracting the thrill-seekers, but in fact, none sees the horrifying things. Nowadays, the construction has been reconstructed and put into operation, aiming to the positive future. So, lay the heads there if you would love the thrilling experiences anyway. 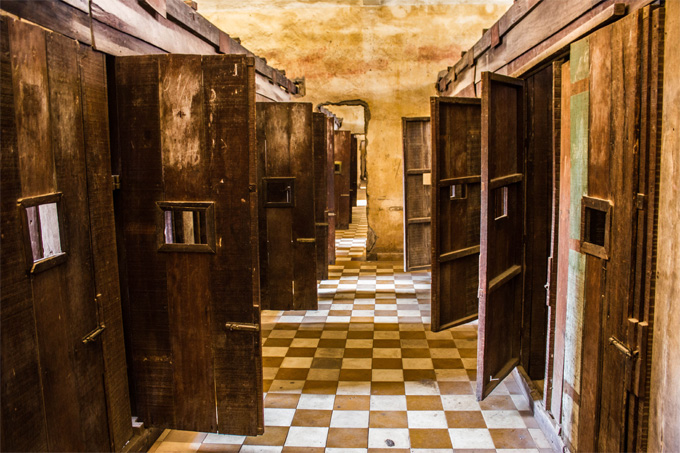 Toul Sleng is a museum displaying the evil of the Khmer Rouge during the period of 1975-1979. This place used to be the secondary school before it was turned to be the central camp of the Khmer Rouge. In 1975, the school became the prison called S21 Prison. During the 4-year domination of the cruel forces, this place confined around 17.000 victims (maybe more). The school was reformed with electric barriers, the jail rooms, and the punishment rooms.

When you first step into the museum, you might feel scary at the unnamed tombs, the pictures of the dead, and the leftover blood trails on the walls as well as the floors. What’s more, in the large jail rooms, there are the photos and pictures depicting the scenes that the victims were being tortured, the iron seats in which the prisoners were forced to sit to be photographed, the fields full of the human bones and corpses killed by the Khmer Rouge. Even in several rooms, there are the wooden cabinets displaying the skulls with the remarks below as “these are the skulls of people killed by the Khmer Rouge.”

With pictures, actual objects, and documents of the evils of Khmer Rouge’s extermination, Toul Sleng Museum in Cambodia is one of the most daring places in the world. Though this site is open to the tourists, not many people dare to enter the historical rooms because they are afraid of witnessing the terrible evidence. So, see what is inside Toul Sleng and evaluate the thrilling effects of this museum by yourself or in a guided tour by Cambodia Tour Agency. 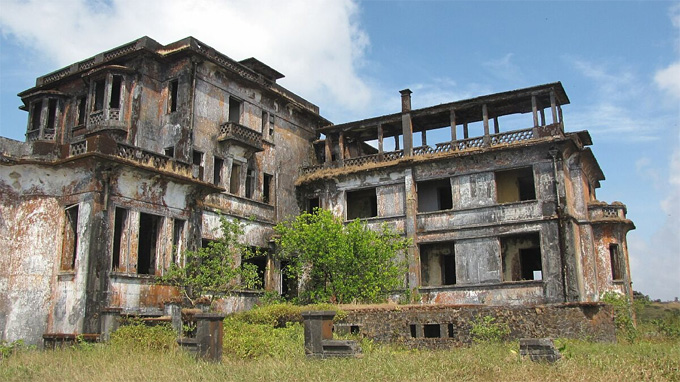 Located on the spectacular hill, Bokor Palace used to be the thriving accommodation choice during the French colonial era. In that period, people loved to shelter there to run away the heat of Phnom Penh. However, after two times being left deserted, all remain are the “ghost” town with lots of collapsing buildings.

You might be interested in the terrifying stories about the birth of Bokor Palace. The abandoned resorts were put under the French colonists’ control to be built during 9 months in the extreme conditions. In 1925 when the construction was finished, more than 900 Cambodians were put to death there. That may be the root of various ghostly phenomena around this fated hotel. The construction is still there, on the windy hill, calling for the adventurers coming to challenge their spirit. 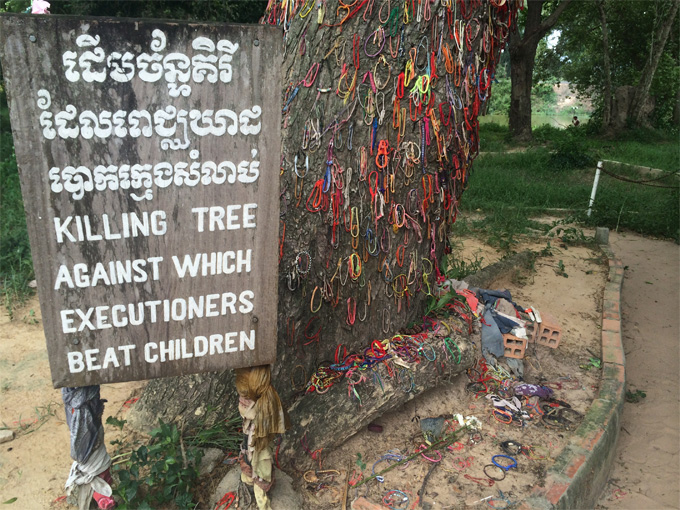 Around 14,5km from Phnom Penh, with 30-minute driving, you can arrive there, the Choeung Ek Killing Field. The historical field lets people get the deep and true insights of the dark history of Cambodia under the “Pol Pot” rule. This is the big grave for those killed during the Khmer Rouge time, so it’s visible that the field is filled with many tombs. According to statistics, at least 1.384.734 people were slain in this place, let it be covered by the frightful atmosphere. Choeung Ek has many tombs for the groups of the dead killed there in an unknown way.

Visit Choeung Ek, everybody needs to watch their steps because there might be the corpses of someone underground. During the rainy season, the soil is taken, leaving the white bones being exposed to the sun. You can also see the clothes of the victims scattered throughout the trees in the area; people let it as it was to show respect to the dead. Furthermore, in the middle of the killing field, there is a Memorial for the unfortunate victims, storing around 8.000 skulls, of which on some skulls, there are the visible strokes of knives or hammers.

In the records of the most terrible things in the 20th century, Cambodia has the high ranking. Keeping the remnants of the dark history, the country wants to remind their generations and encourage them to try for the future. Check out top 4 thrilling places in Cambodia if you dare to!